He's spent most of his recent time at 3B and outfield.
At first glance, I like his swing, I think he could do well

Here is his Baseball Reference Bio
Posted by MoeyoCD at 8:42 PM No comments:

The 2016 NPB Draft took place a few days ago with the Dragons taking the following players:

My first impression of Chunichi's haul is a positive one.  They picked up a highly-rated pitcher with their 1st pick, who may be able help sooner rather than later.  I was happy to see them pick up some position players with their second and third round picks, they need to spend more of their resources on that part of the team.

Chunichi's fifth round pick is of specific interest to me.  Kento Fujishima hails from Toyohashi, Aichi, my wife's hometown.  He is also the same age as my nephew, who played against him in Little League.  He will be a developmental player, but I hope he can progress.  I was a little surprised he chose not to go to college, but fortunately he was drafted even if it was late.

If you would like more info on the draft and specific prospects, Yakyudb recently did a live stream on those topics, as well as some others.  You can access it below:

Chunichi's season has come to a close.  The club finished off the season on a six-game losing streak, falling far behind the 5th-place Tigers.  The Dragons had hopes for a better outcome, at the All-Star break they were in 4th place, only a game out of playoff position.  Things went horribly wrong from that point on.  There was a clear lack of depth from the beginning, and we all know that if injuries occurred to some key players it would become very difficult.  While the pitching staff remained relatively healthy it was the complete opposite for the position players.  Of the position players on the team that I consider key, Yohei Oshima was the only one who didn't miss significant time over the course of the season.  Hirata battled injuries all season and Viciedo, Nanita and Takahashi missed a lot of time.  Good teams can overcome that, but the Dragons just aren't that good, there was no one on the roster to replace those guys and the lineups they were running out over the last month or so of the season were just atrocious.

Looking ahead to next year, things don't look all that bright.  The team just announced that Mori will be back for next season as manager.  I'm not on board with this at all.  I felt that it was time to turn the page to Ogasawara or someone else.  Obviously it's a rebuild, but let the team build with what is hopefully it's future manager.  I just don't understand the point of having Mori as the manager.

Despite the gloom of a last place finish, there were some bright spots for the team this year:

Shinji Tajima: Tajima took over the reigns of the closer position that it seemed no one wanted.  He had an outstanding season though he faltered some near the end, at that point it hardly mattered.  I have to assume he's cemented his role as the closer to start next year.

Shota Sugiyama:  Sugiyama took over the duties of the every-day catcher for the team and had very solid season with a .260/.340/.357 slash line and good work behind the plate.  He shows promise, much more so that than Chunichi's catching prospects of the last few years.

Dayan Viciedo:  He started out on a tear and came back down to earth as the season progressed.  Still he put up good numbers and has interest in coming back next year, so I'll call that a good thing.

Kazuki Yoshimi:  It was just good to see him put in a full season.  He looks a lot older out there than he did pre-injury, but he did some good work this year.  Hopefully we can count on him next year.

Ryosuke Oguma:  Oguma really did well with his opportunities, he ended up with the best record of Chunichi's starting pitchers with five wins and two losses and a 2.80 ERA.  Hopefully he's not just the lastest of Chunichi's young pitchers to put up a good year only to suck the next.

Shinnosuke Ogasawara: Though his record didn't show it (which means next to nothing anyways) he pitched pitched well enough in his rookie season to give Dragons' fans hope.  He finished the season with a 3.36 ERA over 72-1/3 innings.

Overall, pitching wasn't really a problem for the team.  They will have to find a way to score more runs next year if they want to stay out of the cellar in 2017.

An Unfortunate Series of Events

We just returned from our trip to Japan, and while I'd hoped to post some things on the trip, I was unable to because of some computer access issues.  In my previous post I had mentioned that I hoped that the Dragons would still be relevant in the Central League race when I got to Japan.  I guess I should have been more specific, as the Dragons were still in the race when I arrived in Japan, but immediately fell on their face and by the second week of my stay were dead in the water and then decided to fire their manager.  Chunichi was 6 and 14 while I was in Japan has been 10 and 25 since the All-Star break after playing close to .500 ball for the first half of the season.   Fortunately Ichiro's chase for 3,000 hits and Koshien were also going on too, so there was no lack of interesting baseball stuff to follow.

It's hard to say how much of the blame falls on Tanishige, Chunichi's fired manager, I would say that the team's lack of depth has been the biggest factor in their mid-season collapses the last several seasons.  Certainly a portion of the blame should fall on General Manager Ochiai, who has to this point failed to rebuild the depth of team to the neccesary level.  Of course rebuilds are never easy and Chunichi had a string of poor drafts prior to Ochiai coming back onboard.  Still the coming offseason is a big one for Ochiai.  There is talk that top Dragons' players Hirata and Ohshima are tired of Ochiai's miserly ways, and yearly contract disputes.  Both players will be domestic free agents this offseason for the first time, and if Ochiai fails to bring them back for next season, he will have pretty much torpedoed the team's chances to build a team in the near future.  Ochiai has a lot of support from the front office for previous success as a manager and likely also for cutting payroll, but if Ochiai can't keep Chunichi's core together for next season he will certainly lose my support.

Chunichi's big win last night clinches at least a series win against the Giants at Tokyo Dome, always sweet! The win was highlighted by Dayan Viciedo's 2 home runs in one inning, per YakyuDB, he's only the second Dragon to do that.

The Dragons currently are tied for third, but only one game out of first place.  So far, outside of their struggles against the Carp, Chunichi has played very solid ball.  I feel though that they may be at a bit of a crossroads.  Going into the season I saw depth as a major concern for this team.  Injuries are starting to pile up already, but to this point they have weathered some key ones.  Of the best players on this team: Yoshimi, Ohno, Hirata, Viciedo, Takahashi, Oshima and Nanita, over half have already been affected by injury.  Ohno and Takahashi will be out for a while, Hirata is back now and Yoshimi is being treated very delicately (for good reason).  Not to mention Issei Endo, who was supposed to be a contributor on this team, but struggled out of the gate and then got banged up.  He's now back playing with the ni-gun team.  The good news is that Chunichi hasn't lost anyone for the season, the question is can they keep things going in the right direction until they get guys back.

I think they can, but we will have to see if they will.  Since rejoining the team Hirata has been red-hot, that has covered the loss of Takahashi so far, who was off to a very promising start to the season.  Hirata along with Viciedo and Nanita , who have been mashing to say the least, will have to stay health and productive to power the offense.  The back end of the bullpen, last year's Achilles heal, has been good, especially Fukutani and Tajima.  They need to keep that going and hopefully get a bit of improvement from some of the middle relievers.  The starters just need to tread water for the most part, a good bullpen can make up for a lack of depth there, plus they may have found something special with Jordan Norberto.

We will see, but interleague play may prove to be a blessing as well.  If the Pacific League dominates again, the Central League teams will likely stay packed together like last year.  If they can hang in it until late-summer, then anything can happen down the stretch.  This is a team that was pegged for last by a lot of the media, but thus far they are looking improved. I'm hoping for a competitive season and really hope they will still be relevant this summer when I will be going to Japan.  Maybe the re-build will be short lived, I do see a young core coming together. Let get fired up for 2016 and beyond Dragons' fans!

Posted by MoeyoCD at 7:14 AM No comments:

Chunichi is off to a respectable start at 3-3 after losing their first series of the year at Hanshin and following it up with a series victory at home versus the Carp.
Dayan Viciedo and Shuhei Takahashi have been doing a lot of the damage offensively, with Takahashi hitting a huge Grand Slam late in the Dragons' most recent game propelling them to a comeback win.  It was exciting week of baseball, get fired up Dragons fans!

Following all the action is a new Dragons Blog in English called Dragon Soul.  It already has a lot of good information on it, including some write-ups on Chunichi's first series and coverage of the Ni-gun team's Western League games.  I'm excited to have a new source of Dragons information in English and will surely be checking in on it frequently. 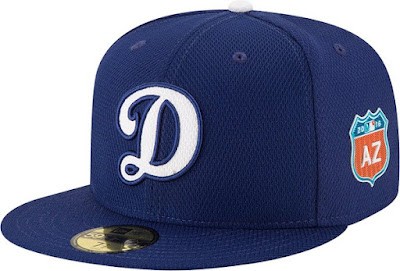 Above is the new cap the Los Angeles Dodgers will be wearing for this year's Spring Training in Arizona.  From what I've read the Dodgers have never worn a script "D" like this ever before.
There is though another team that has, that team being your Chunichi Dragons.  Since it was announced several American blogs (Uni-Watch & True Blue L.A.) have picked up on the fact that it has been worn before, mainly though from the Hollywood movie that we all know and love "Mr. Baseball."

This photo has been tied to it showing Tom Selleck's approval: 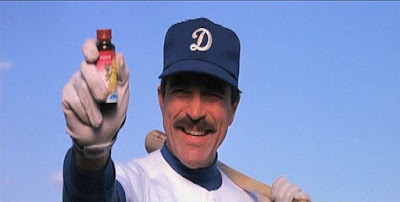 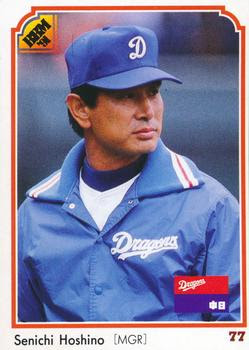 The Chunichi version can be purchased from New Era Japan.
The L.A. version should be available very soon.